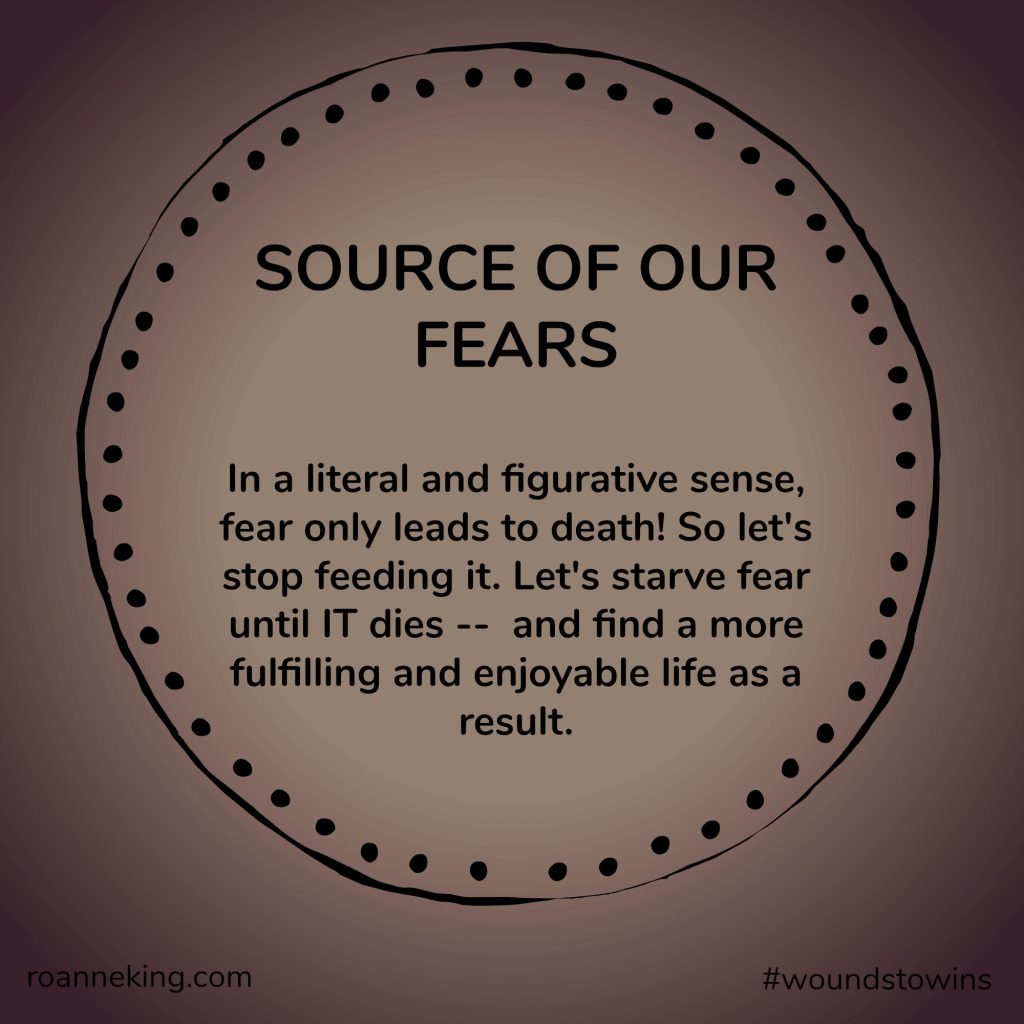 For every emotional wound we hold on to, there is a fear associated with it. Sometimes we don’t realize where our fear stems from until we dig into our past to understand it, and decide not to place blame or make excuses for the broken people we are today.

The song “fear is a liar” resonates with me often and usually reminds me I’m allowing fear to dictate my day. Nothing good comes from fear. And it really doesn’t change our circumstances. It changes our response and can lead to deeper consequences the longer we feed it. Anxiety, depression, and even suicide are rooted in fear. The seemingly contrary solution to this is to face our fears in order to get rid of them! Fear is a funny thing — you have to look it in the eye and say, “Go Away, you lying [best metaphor for pile of garbage you can think of]” and really, really mean it!!

We can become stagnant in our life, not willing to take risks or steps of faith to pursue our purpose. Or we can give up on life completely. The movie “Joe Verses the Volcano” (starring Tom Hanks and Meg Ryan, 1990 … a classic for sure and before I digress, I’m making a note to add this to my King Family Movie Shelf series). Anyway, the movie takes a somewhat humorous approach to this concept of facing our fears. But there is one line in the movie that has stuck with me for the over twenty-five years since the first time I watched it. Joe is talking to the first of two sisters, Angelica (both played by Meg Ryan) — who is contemplating ending her life in a matter-of-fact way, and he says…

So many things can die the longer we give in to the spirit of fear. Our physical bodies experience pain or illness. Our relationships become broken. Our ability to achieve our dreams is destroyed.

Sometimes it seems easier or “safer” to act on fear instead of faith. But I’ve learned otherwise. And I desire to bring my own life’s testimony of overcoming my fears — an ongoing lifelong process by the way! — into the lives of the characters in my stories in order to bring hope and encouragement to my readers to not give up!

There’s another song with a verse that says “I’m no longer a slave to fear. I am a child of God.” My identity in Christ is always a comfort once I recognize my emotions or thoughts are being ruled by fear. Translating this into a realistic and relative fashion for each of my very different female characters is much more challenging that my personal approach — which usually involves blasting my Christian music loud enough that I can’t hear myself singing and until I can feel the peace of God washing over me.

For the purpose of fiction, while considering that two of the sisters are not women of faith at the beginning of the story, I’m attempting to take a more practical approach to them facing and recognizing the source of their fears.

Fear comes in many forms, but can often be defined by its relation to a death of some sort. As James Scott Bell says, facing that death in an emotional or spiritual sense is where the character begins to experience the change (and victory over fear) required by the end of the story.

In every fiction story, the main character must face their fear (potential physical or spiritual death) at some point, or there really isn’t a story. As a writer, I must understand what that fear is and where it comes from in order to properly develop my characters throughout my stories.

For my WIP A Cord of Three each sister’s conflict is rooted in her greatest fear, and each fear is a type of death. A shared fear for them all is that their sisters will see them as failures — or the death of the image of success each desires to portray.

Ava fears the repeat of her own life as her teen daughter announces an unplanned pregnancy. It’s a 2-part death of sorts. The death of her daughter’s future as a university student, and the death of Ava’s independence and her plans for freedom and feeding her soul once her daughter is off at college. Basically everything she’s been working toward is about to die. She also has a deeper fear related to her history of being sexually violated, but that doesn’t surface until the next book in the series. SOURCE: Being raised by a single mom and knowing how hard it was to raise her own daughter.

Rachel fears that her husband will die. This is also a 2-part fear — the physical death of her husband and the potential spiritual death of her sisters never coming to believe in God and receive Jesus as Savior if He allows her husband to die. She is also afraid of being able to provide for herself and her children since she has no work skills or understanding of how to manage their household finances. SOURCE: Again, stems from growing up with a single mom and no father figure. As the mother of four girls, this makes the fear even deeper. She knows how much her girls need their daddy and can’t imagine them growing up without him.

Sadie fears she will lose control of her life after becoming a mother. Life as she’s known it is coming to an end (it’s going to die once she gives birth.) Having responsibility for another human terrifies her. It’s the one thing she knows she can’t control. What if she fails? What if her daughter hates her (like she hates her own mother?) What if, even with her husband present, they can’t raise a well-rounded, confident, capable daughter? What if she can’t protect her or keep her safe from harm? SOURCE: Having been responsible for her sisters from a young age (because of growing up with a single mom), she was put in many positions where she felt she failed to protect her sisters — namely the night Ava was date raped.

This blog post series is meant to explore the real-life experiences my sisters and I had and how I’ve used them to create the fictional characters, their emotional wounds, and how each woman overcomes the wound with a win of some kind.

By sharing how the fictional wounds represent our real ones, there is a lot to be interpreted regarding which parts are real and which are make-believe. Overall, the story is “based” on actual events, but it is not an accurate representation of the events of our childhood even if I’ve mirrored certain memories to include depth and layering.

It’s also important to note that I’ve decided to exclude a father’s involvement in order to focus more on the relationships between the sisters and their relationship with their mother. Though the lack of a father figure factors into the equation, I am not modeling their fictional father after our own. With the exception that we spent most of our teen years living with our mom, he was still a part of our lives on a regular basis.