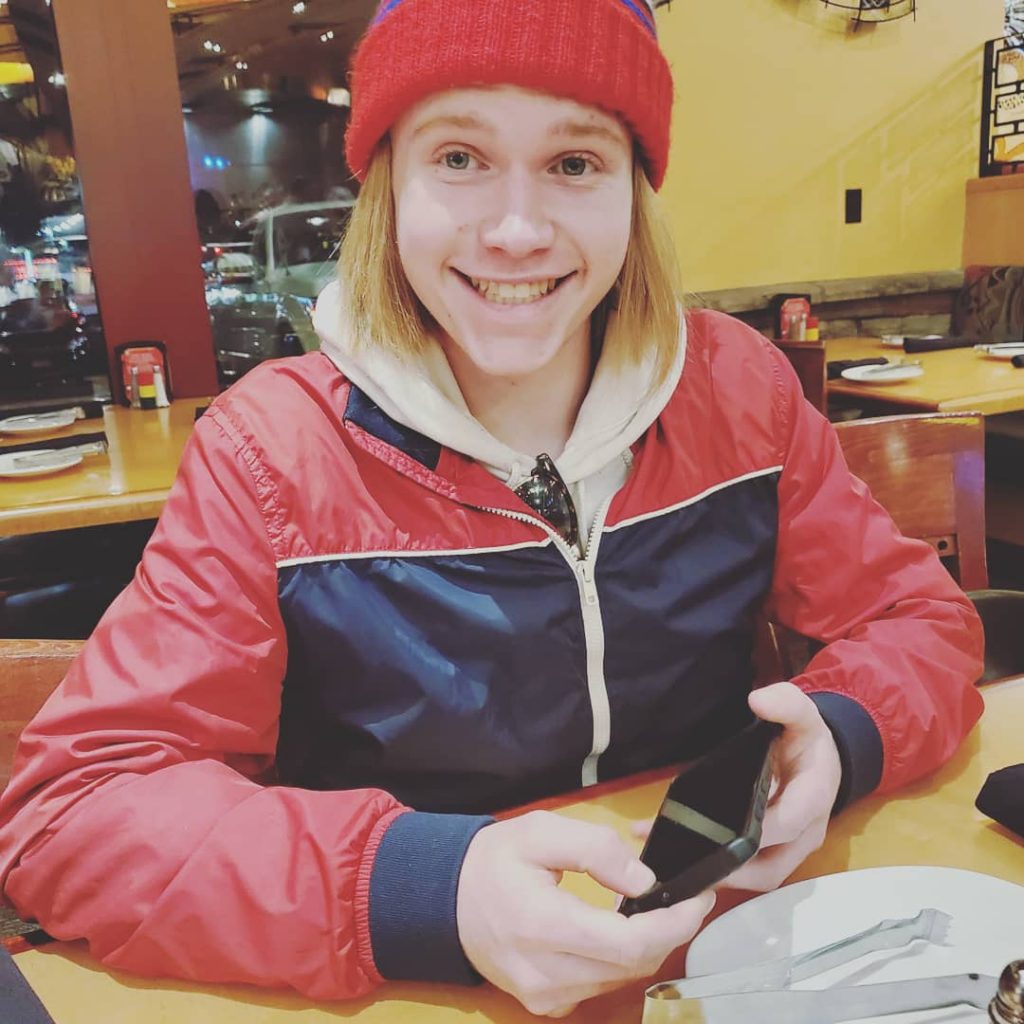 On Tuesday, February 4, 2020, we celebrated our son, Jared’s 18th birthday. Our fourth child to enter adulthood, Jared is by no exaggeration the polar-opposite of his brother Dawson (I wrote about him for his 18th a few years back — see that post HERE.)

While our ever-expanding family ate dinner in the center of Tucano’s Brazilian Grill, I briefly summarized how Jared came along right after we had overcome our first, arduous year in Idaho. Back in 2001, our marriage was on the mend and I was fully devoted to homeschooling, women’s Bible study, and removing every hint our our pre-Christian life while rebuking the generational bondages I’d inherited from growing up in a broken home.

Our daughters were ages six and eight. Dawson was about two and a half. As usual, I was eager to jump into this new life of pure living — devoted to my husband, home, and children and fully ready to trust God with the size of our family.

Looking back, I was naive to think it would be easier to manage a limited budget as well as reduce any temptation to go back to work once we grew our family by having more than three children. We had taken our health and the health of our existing children for granted at that point.

I waited to tell my husband I was pregnant again on Father’s Day weekend of 2001. He was happy and we were excited to find out if we would have another boy — giving us two girls and two boys in total. But we found out more than our newest baby’s gender at the ultrasound. When we got the full results at my 20 week check, we were told our son’s kidney was not functioning properly.

A Test of Faith Beyond Simply a Larger Family

The second half of my pregnancy tested my faith in ways I never imagined. A million what-ifs accompanied every subsequent ultrasound and test as the doctors closely monitored Jared’s kidney function in utero. Depending on what they found, he could require emergency surgery upon birth. But besides his kidney inflating more and more, he appeared otherwise healthy.

Then I experienced what I would later learn was prodermal labor. At about 35 weeks, contractions would start and last for a couple of days and then stop again. One time, they were consistent enough that I went into labor and delivery, thinking for sure this was it. But I wasn’t quite dilated enough to be admitted. So the nursing staff sent me home with a sleeping pill and instructions to come back in the morning. I was so sure that I was in actual labor, I called my dad to fly in. He’d missed the birth of Dawson and I really wanted him present for Jared’s birth this time. My mom had already tried to stay long enough at an earlier visit, but had to fly back to California before I went into labor.

It would be the first time I’d given birth without my mom present. So having my dad there instead was really important to us all.

However, the contractions stopped again! My dad was already in-flight and stayed for several days while we all hoped and prayed labor would begin before he had to go home.

By this time, I was frustrated on so many levels. Not only was I facing labor without either of my parents, close friends, or other family nearby, but we had no clear idea about how Jared’s kidney would respond or function after birth.

It was no surprise that during my 38 week OBGYN visit my blood pressure was a bit high. Despite having allowed my previous labors to begin on their own, the long and short of our discussion convinced me that inducing labor was the best overall option for my health as well as Jared’s.

When given the possible dates, February 4 was one of them. The date was significant to my husband and I as it was the anniversary of our first kiss back in 1993. I felt like it was God’s way of telling us he had this under control and to trust him, even with the need of medical interventions.

Thankfully, our good neighbors and church friends took over the care of the girls and Dawson. And even though I was dilated to 5cm upon arrival for the induction, active labor didn’t begin until well into the afternoon. This would be the most difficult labor so far and the first time I would experience an epidural. But Jared arrived all pink and chubby and by all appearances and initial exam had all body parts functioning!

Through his first year, Jared was a good eater and grew steadily. His urologist did regular tests to monitor his kidney and put him on preventative antibiotics to ward off infection. He was a happy baby and developing normally.

So when I had the chance to fly down to California and surprise my dad for his 50th birthday when Jared was 11 months old, I decided to take him off his antibiotics for the weekend to avoid the hassle of keeping it refrigerated during the flights to and from.

A Whopper of a First Kidney Infection

Though the doctor assured me it was not the case, I still wonder if that small break in antibiotics coupled with the stresses of traveling didn’t contribute to Jared’s first kidney infection.

My poor baby was miserable most of the weekend. I thought maybe he was constipated as he didn’t have a fever despite his chronic crying the day prior to our flight back. While waiting for our flight to Boise in the San Jose airport, Jared cried non-stop. I was alone at that point and very disappointing that not one of my fellow travelers made a gesture to console me or my baby in the airport or on the airplane. Frustrated to tears by the time we boarded, Jared finally fell asleep on my lap, giving me a chance to rest as well.

It was either that evening or the next morning that Jared spiked a fever. It took two ER visits before he was admitted to the pediatric floor at the hospital. He was so dehydrated at that point, the nurses had difficulty inserting his IV. He wouldn’t give up fighting their efforts either! I remember keeping track of the time, counting each of the forty-five minutes it took for me and the two nurses to hold down my screaming baby until finally they were able to place the IV.

Three strains of antibiotics and five days later, the infection started to get under control. Then came the necessary discussion with the urologist that led to his strong suggestion that Jared undergo surgery to correct the narrow exit from his kidney to his bladder.

Faith and Trust Build During Surgery

The surgery was supposed to be simple enough it could have been an outpatient procedure. They only admitted toddlers and young children over night as a precaution.

But then Jared’s digestive system shut down after surgery. I couldn’t even hold him, as the slightest touch caused him to screech out in pain. The surgery location at his kidney had closed shut, swollen from the trauma.

He would require another procedure where a tube would exit his back to drain his kidney into a bag outside of his body. For six weeks, I would need to clean and maintain the tube and bag while his kidney healed enough to give the doctor what information he would need determine the next step.

Jared stayed in the hospital another five days after that initial surgery. During that time, I slept in his room and spent a lot of time praying and journaling. At one point, I flat out asked God His purpose in all this. Why was my son suffering so much? Why, when for the first time in my life I’d put God first, studying his word and devoting myself to my children, husband and church, would this be happening?

Then, as if he spoke the words aloud, I distinctly heard this short explanation:

I’m preparing you for something else.

Of course, the worst of all scenarios ran through my mind. Was Jared going to die? Was my marriage going to die? But I quickly avoided going down either road of possibilities.

I had to trust that God had a purpose. And to be honest, I was too exhausted at that point to put energy into worrying about something I had no control over.

What Was God Preparing Me For?

And eighteen years later, I’m still walking that out. While at the time, Jared was technically the first of my children to suffer from health challenges, each of my five children have faced a health crisis of one form or another over the years. As my post highlighting just the last decade of Health challenges details, my faith builds daily in this area as I can never take the health of any of us for granted.

Some might say I’m foolish for continuing to trust God at all with the gamut of health problems we’ve faced. But we live in a fallen, broken world and at the end of the day, I’m thankful for all the ways God has shown me how to care for myself and my children. I’ve learned not to fully trust that doctors know everything, but have also learned when their insight is best. I’ve learned many natural ways to maintain health or offset illness as well. Through it all, I understand that his original plan for us all is to be completely healthy in our souls, minds, and bodies! And despite the broken and toxic world we live in, He has given us the resources to thrive anyway!

Back to Jared’s 18th Birthday

Out of my five children, Jared has been more challenging in areas besides health. Though it took several procedures over the year following his kidney surgery, by his fifth birthday, his urologist announced he would no longer need to see Jared. His kidney was functioning at near 100% and if his doctor didn’t know better, he would never have known Jared had surgery at all!

At 18, Jared is the healthiest of all of our kids. He rarely gets a cold and is fit and smart and highly motivated. He cannot wait until after graduation, where he can pursue his many “adulting” plans to get an apartment with his friends, continue to work full-time, and join the Navy Reserves.

I’ve had to learn to put my trust in God more this past year as Jared insists on learning life lessons the hard way. His dad and I have struggled setting or maintaining what the world would say are the ideal limits and consequences, yet Jared appears to be getting himself on the right track despite our failures.

What started out as a small step of faith in growing our family by one more child has helped me to grow my faith in every area of my life. I see it as a great example of how we can never know how one life can impact many others. How that positive pregnancy test (whether planned or unplanned) has all the potential to be a positive experience despite the known or unknown challenges that lie ahead.

Who knows, maybe you will also find yourself one year down the road, a large table filled with your mostly adult children, their spouses, your spouse, and a few grandkids while you tell the story of how one of your babies helped to catapult your life of faith in ways you never thought possible!