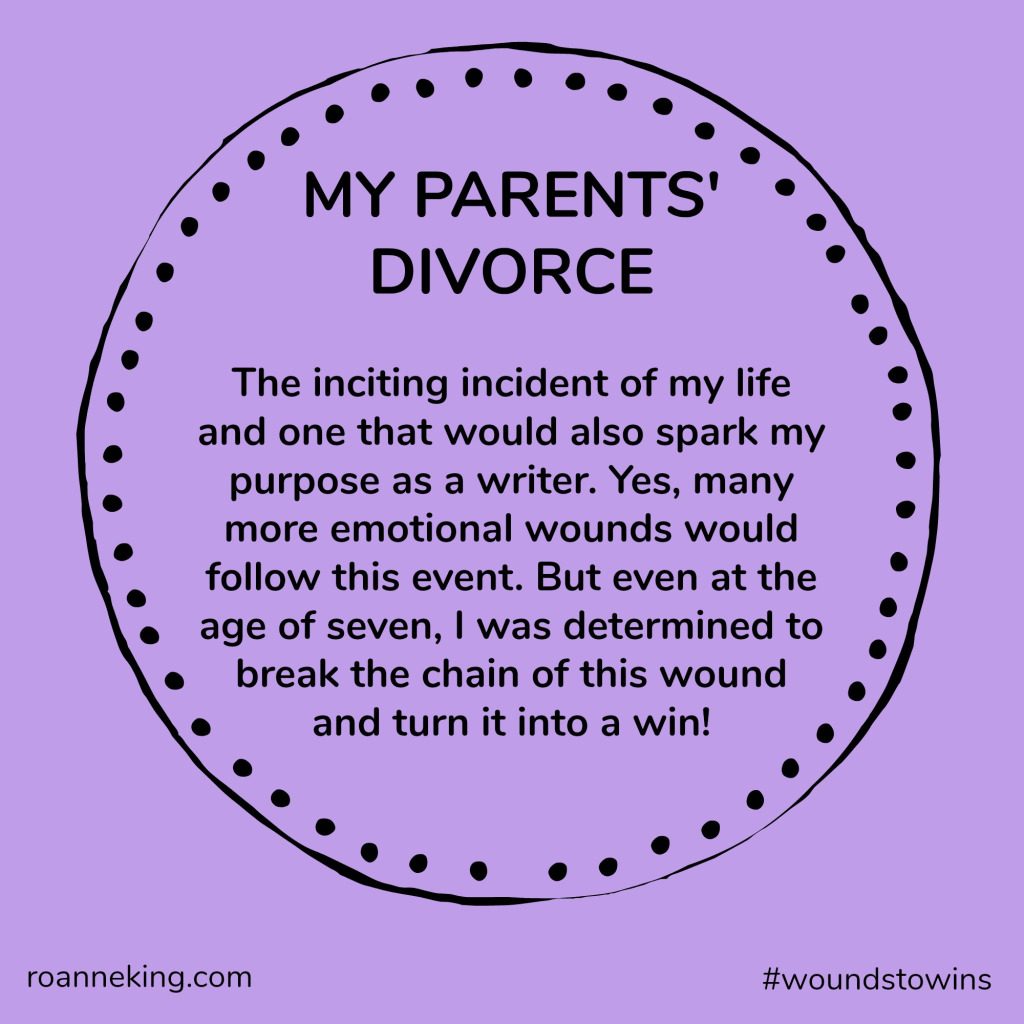 I have a memory of sitting at the dining room table when I was seven years old. And though I’m sure the exact details are muddled and inaccurate, the moment would define the course of the rest of my life:

My mom sat across from me at the other end of the table, distracted by some paperwork in front of her. I’m pretty sure it was after school, though I don’t remember having a snack or anything in front of me. But my young and impressionable mind was on one thing — my friend’s parents were getting a divorce.

Though I’d had very little exposure to the concept at that age, I knew that it was something I didn’t want my parents to do. I knew it wasn’t a good thing for me or my parents.

Our life was simple and secure in that moment. I had mostly good memories filled with playing with my sisters in the neighborhood, baking and gardening with my mom, working on projects with my dad, girl scouts, camping, and more.

Precocious to the core, I had to get some reassurance. So, I asked my mom point-blank —

“Mommy, will you and Daddy ever get a divorce?”

She didn’t even look up from whatever was in front of her. She just shook her head and said, “No.”

I don’t recall much else from the conversation. I may or may not have asked her to promise, but in my heart that’s what she’d done.

Then one day not long after, I burst in the back door one afternoon. I’d run down the dirt driveway after getting off the bus and remember feeling so happy because Daddy was home.

My dad sat in the chair below the phone that hung on the wall in our kitchen. He hung up the phone when I entered and the look on his face put a halt to my jubilation.

Tears streamed down his face as he looked at me with more sadness than my little seven-year-old heart could process. “Mommy and I are getting a divorce.”

Coping with the Consequences

The following four years included a lot of adjustments. My sisters and I walked to our new school since my mom moved into a house in town. We lived in Loveland, Colorado at the time. We visited Daddy on the weekends at his new house and took drives in his new sports car. We had several babysitting adventures as my mom joined the work force and eventually had three jobs. My sisters and I were alone a lot, but for the most part we adjusted to the latch-key-kids-of-divorce life relatively unharmed.

Then our dad decided to move to California. That summer, weekend visits ended and the tiny pinprick of a hole that I’d felt in my heart from life without my dad on daily basis began to grow. I was eleven years old and I’d already started experiencing the changes of a young woman. So it was probably the worst time to have that void of a father in my life.

But, my mom had started dating the man who would eventually become my step-dad (that experience is a whole other topic I’ll address in another post one day.) But, for various reasons, he still didn’t fill the empty space I felt from not having my real dad around.

My mom was too busy to notice her little girl was maturing in every way. I didn’t understand all the changes either. Hormones, emotions, and curiosities without parents guiding me would set me on some unhealthy paths that I would reap the consequences of for years to come.

Then, as summer came to a close, my dad called us after what felt like months without contact. It just happened to be the day I shaved my underarms for the first time. Finally hearing my dad’s voice on the other line was such a relief. Then he told me the reason for his call.

The conversation would end with me talking to my future step-mom. She sounded young and fun, and gave me encouragement after hearing of my initiation into womanhood.

Everything in me did the best I could to embrace the idea in a positive way. Along with my new stepmother I was also gaining two step brothers. And they would be picking us up to spend the rest of summer with them in California so we could be part of their wedding at the end of August.

The Story in Me

Seems like a lot happened that year I turned eleven. My sisters and I never returned to Colorado. I ended up starting fifth grade at a small school in the Santa Cruz Mountains named Loma Prieta Elementary.

As a probable coping mechanism I had gradually began viewing my life as a story. I’d separated myself from my experiences and started viewing them from the outside. I think this kept me from feeling the true impact of all the changes and events occurring more rapidly than I could realistically adjust to.

I wasn’t just adjusting to divorce, moving across the country, and life in a blended family. I was being exposed to more harmful things than I care to share in a public forum. And I had no clue how to manage the feelings that went along with experiences that were out of my control.

I’d already been witness to my mom and her boyfriend’s awful fights. And it wasn’t long before my dad and step mom were at it too. I was so confused since I never saw my parents fight like that with each other. It would be years before I would ask why they ended up in marriages so much worse than what they’d had before.

Eventually, I found the only escape that was feasible. I read stories of other lives much worse than my own. A school friend had turned me on to a series of books that was far too mature, detailed, and dark for my young mind and heart to handle. But again, with my parents too distracted and distraught over surviving their current marriages, I was left to my own devices.

Then, after a teacher told me I was a good writer, inspiration struck me. I had always been a storyteller (see Toilet Paper Tears), but the trauma of four years of upheaval hadn’t left me with much of a chance to be creative. The only good thing that came from reading six-plus novels from the same author was that I quickly learned to copy her writing style when I decided to write my first novel.

Hole in My Heart

I can’t remember which of my parents got the computer or word processor first. But I started writing “Hole in My Heart” at my mom’s house. She’d eventually moved to California with her boyfriend after working off debts and realizing my dad wasn’t bringing us back. They lived about a three-hour drive away in the Grass Valley and Nevada City area of the Sierra Nevada Foothills where my mom’s sisters and brother lived. My sisters and I ended up bouncing back and forth between our parents for the rest of our school years.

Obviously, at age eleven, I didn’t have the best grasp of how to write a novel. But I did somehow understand that it needed to start with a defining and traumatic moment and end with some type of resolution. My story would begin with the father abandoning his family without explanation. The oldest daughter (of course I gave her the older brother I never had) would be the main character trying to adjust to life without her dad, whom she had considered her best friend. The story would also include a move from Colorado to California, where the girl would fall in love as a temporary answer to her pain. By the end, her boyfriend would encourage her to forgive her father and they would eventually be reconciled. It was a combination of creating ideals in a life I never had and also adding more dramatic or fictional events to make it more interesting.

If I recall, I typed approximately fifty pages of the story, saving it on a floppy disk so I could write at whatever parent’s house I was at. At the time, I had goals to become a famous teen author. I had no idea how the publishing industry worked, by ignorance was bliss and it allowed me to write without limits — or spelling or grammar check! My main motivation to be published wasn’t only to be famous. Even at that age, I wanted to tell a story that would bring hope to some young girl reading it who perhaps was also coping with the consequences of her parents’ divorce.

But then something unexpected happened. The process of writing a fictional portrayal of the feelings and experiences I had or wanted to have started to fill the hole in my heart that had grown since the day I learned of my parents’ divorce. I wasn’t simply a storyteller anymore. My stories had purpose.

I never finished writing “Hole in My Heart”. During the many moves and changes over the remainder of my teen years, most of those fifty pages were lost. I still have a few drafts that I’d worked on over the years — typed, rewritten by hand, and possibly a portion of my first draft, but I didn’t date it.

Maybe one day I will finish it. But even if I don’t, these pages still symbolize the beginning of my writing road.

Whether others are inspired to write as a form of healing or to read my stories to find hope, my desire is that God shows me how to take my wounds and turn them into wins for every life that my stories touch.

Yes, God hates divorce for many reasons. But he is also the ultimate healer and author of reconciliation and his Word says in Romans 8:28 —

“And we know that God causes everything to work together for the good of those who love God and are called according to his purpose for them.” – Romans 8:28