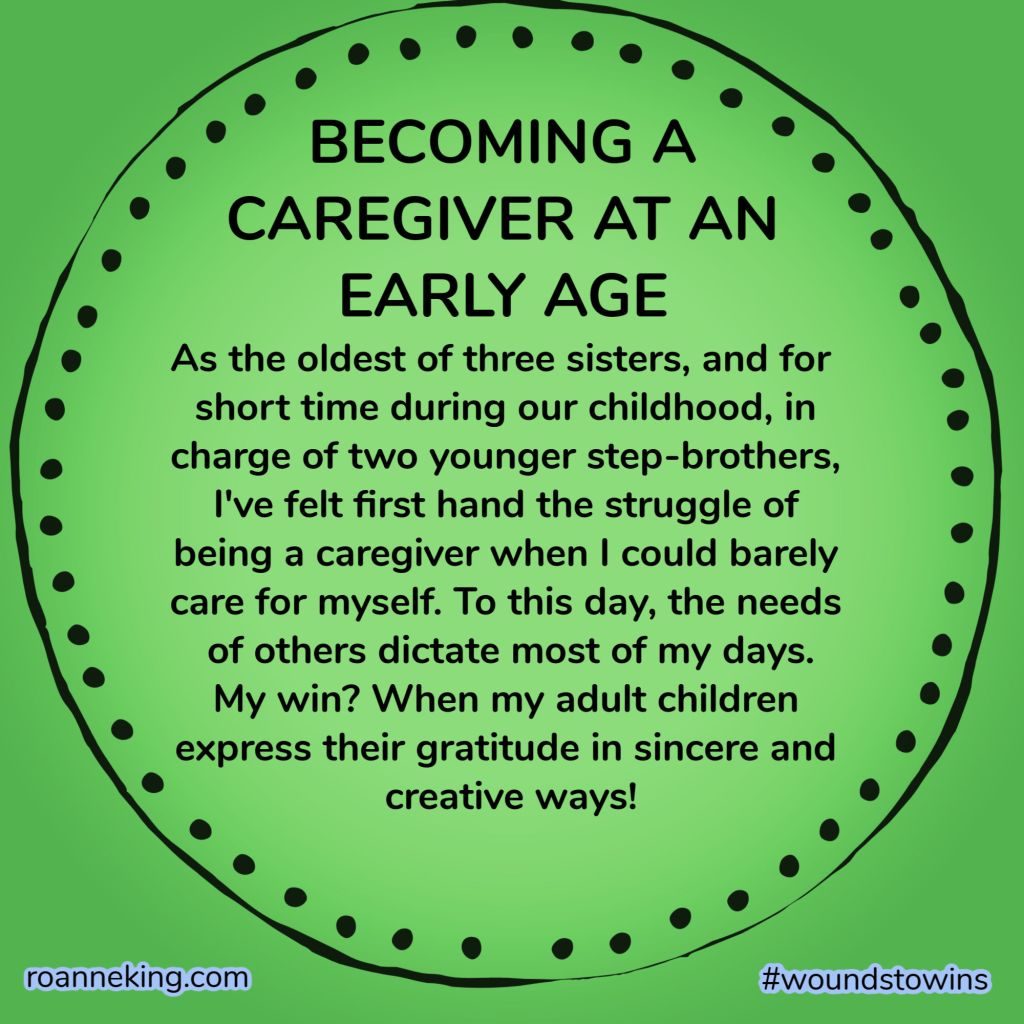 This post is inspired from the Emotional Wound Thesaurus entry described as “Becoming a Caregiver at an Early Age).

As I work through describing each wound related to my fictional novel-in-progress, A Cord of Three, I’m seeing how some of the wounds I’ve assigned to my sisters are self-inflicted, while others are out of their control.

This wound is designated to Sadie, the oldest of the three sisters who took on the mothering responsibilities while their mom provided shelter and little more for boundaries or other essentials growing girls require. Her experience is different in many ways than my personal journey as the oldest of three sisters, then the oldest of five after my father remarried and I gained two little brothers.

Fictional Sadie doesn’t experience step-siblings or the responsibility of caring for them. A perfectionist and protector from the start, where her mother lacks in instinct, Sadie swoops in and fills the gap. Unfortunately, this makes it easier for Kate (the sister’s mother), to disregard the needs of all her girls time and again.

Essentially, Sadie loses any chance of enjoying life as a teenager. Though close in age to her sisters, her serious focus and inability to “let loose”, usually end in a battle of wills until the one night Sadie agrees to accompany her sisters to a party. The outcome of their night only reinforces Sadie’s fears as well as her lot to protect her sisters instead of joining them. While Rachel and Ava choose opposite paths, Sadie sees them both as foolish lifestyles that offer no accountability. When Sadie goes off to college, she is finally able to rid herself of the burdens left by their irresponsible mother.

Back Story to Plot Focus

It’s one thing to have enough back story of each of my story’s characters to write a memoir. It’s another thing to weave each woman’s story — her emotional wounds, fears, and present day life — into the themes and plot for a novel. This isn’t an easy feat, and I feel far from achieving my ultimate goal.

This series of posts does offer me breakthroughs as I brainstorm the purpose of each wound in light of the story.

This particular wound of being a caregiver at an early age is pivotal for Sadie. The trauma and failures she knows as her truth related to the role she was not equipped to fill is the main reason she has avoided becoming a mother for so long. The closer she gets to the birth of her daughter, the closer the wounds and associated memories surface.

I’m still working on effective strategies for revealing this wound and subsequent positive and negative traits, as well as fears that have turned Sadie into the woman she becomes in the present-day portion of the story. After exploring this wound and using the priceless resources of The Emotional Wound Thesaurus, Positive Character Traits, Negative Character Traits, as well as One Stop for Writers online tools (story map, timeline, scene maps, and more), I have a clearer picture of process Sadie will go through to overcome this wound. By the end, she will experience the joy of victory over her fears and win in ways she didn’t know were possible.

By sharing how the fictional wounds represent our real ones, I realize there is a lot to be interpreted regarding which parts are real and which are make-believe. Overall, the story is “based” on actual events, but it is not an accurate representation of the events of our childhood, even if I’ve mirrored certain memories to include depth and layering.

Also note, that I have decided to exclude a father all together in order to focus more on the relationships between the sisters and their relationship with their mother. Though the lack of a father figure factors into the equation, I am not modeling their fictional father after my own to any extent.

However, this blog post is meant to explore the real-life experiences my sisters and I had and how I’ve used them to create the fictional characters, their emotional wounds, and how each woman came to overcome the wound with a win of some kind.