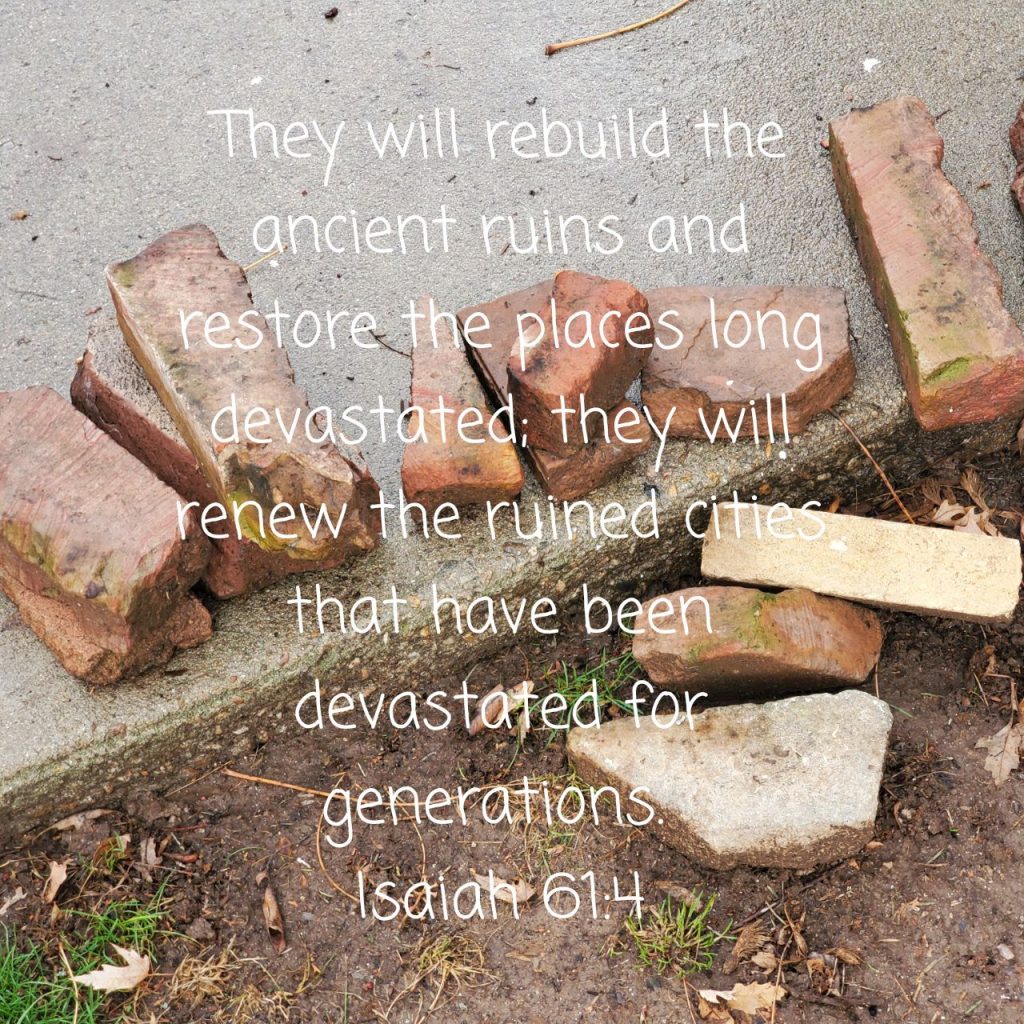 Decade at a Glance

Over the past decade I’ve learned to care for my own personal health and eventually recovered from severe chronic pain and fatigue as I carefully weighed every choice in order to gain the ability to work full-time. Also, our youngest son acquired severe eczema, which led to me spending most of my free time in the kitchen. Then our oldest son received a diagnosis of Celiac disease just before we moved back to Idaho in 2016.

My husband, who never gets sick beyond a runny nose, was ill for nearly the entire month of January this year. He started out with a fever, fatigue, and headache that lasted about six days. Then he tried to go back to work for a week, only to end up with a severe cough which led to his first ear infection in his adult life.

As of today, his ears are still plugged up and his cough is still present despite being on a second dose of antibiotics.

Meanwhile, I’m having an odd sort of “flare-up” that’s been going on since late Saturday. At first, I thought I was just a little sore from a two-hour struggle in getting my one-year-old grandaughter to sleep and wrestling with a deeply-rooted bush branch in my backyard.

But I’m experiencing more than simply a sore back. The pain goes deeper — the familiar fibromyalgia tenderness and hypersensitivity — to noises especially! — is only adding to my irritation and frustration that keeps me from being consistent in my daily/weekly routines.

Thankfully, these ‘”flare-ups” are now few and far between. And the serious flare-ups that used stop me from doing anything besides basic survival tasks are far behind me. Still, it seems like I never get more than a couple of weeks of reprieve before I get hit by something like a migraine, insomnia, or the ever-consistent PMDD (premenstrual dysphoric disorder). I’m used to that one! And there’s a good chance I’m experiencing an extreme month right now and that’s all it is.

Still, I was feeling so good a few weeks ago! I was getting things done, felt a clear direction for my writing goals between blogging and work on my various WIPs. But that’s how my story goes. Health struggles in one form or another seem to be a fact of life in our family. Granted, I must be grateful now and as I recall the items on this list, I will be mindful of how far we’ve all come in the areas of health and wellness!

A Look Back at Our Health Struggles in the Last Decade

There was relief on the horizon from the burdens of mothering five children with little outside help for over a decade. My oldest daughter was also going to be graduating from high school the following year and we were making plans to visit colleges. My youngest son, who’d had many health issues due to his rare digestive disorder (CSID – Congenital Sucrase Isomaltase Deficiency ) was doing fairly well. See, A Place to Start Without Sugar or Starch for a link to the book I wrote in detail about this journey. At least his breath-holding spells had stopped and he was gaining weight steadily. He loved school and seemed to enjoy the independence it gave him walking to and from his school with his older brother.

But things were going downhill fast in the areas of our business and marriage. The business-partnership was crumbling and this led to financial and relationship strains between us all.

Still I pressed on until the end of the year. Then came Christmas and my inability to recover from an evening of present-wrapping. If my memory serves right (which it probably does not) — by the early spring of 2011, I was experiencing full-blown and intense fibromyalgia symptoms. From migraines, to severe myofascial pain that felt like a bad sunburn all over my body, to depression (which I’m sure I had but was never treated for), to dealing with the side effects of the array of medications my doctor had given me to help me cope with the pain and to sleep — I wondered if I would ever be able to sit at a computer desk again.

I honestly felt like I may never be able to write again. I couldn’t hold a pen or type into my phone, let alone a keyboard due to the muscle fatigue and brain fog.

For a look back at a couple of posts I managed to publish during that time check out Learning to Manage FMS and More than Managing Pain.

Flash forward to 2013. I’d adjusted to my job at the magazine and our three boys were getting accustomed to the advantages and disadvantages of being latch-key kids. But our youngest, Parker, wasn’t fairing so well. He’d been forced to change schools due to zoning and over-crowding rules. I’d made valiant efforts to meet with the new school nurse and principal regarding his rare digestive issues and the need for him to take digestive enzymes with his lunches. We could not afford to provide his lunches at that time, so I felt if he was careful and took his enzymes, he could manage to eat school lunches.

We’d settled into our second apartment as well and I’d gotten used to heading to bed by 8pm with my tea and medication while my husband put the boys to bed a little later. Though we were still dealing with the residual stresses of our move/relocation, I’d been put on salary and things were looking up.

Then one day, I caught a glimpse of Parker running from the bathroom to his room after a shower. It was then I saw the red patches behind his knees and I freaked! Upon closer examination and questioning, he’d been hiding his rashes for weeks, wearing long pants and long-sleeves despite the weather getting warmer. He’d been scratching too, which made it worse.

He’d never had a break out this bad before. The worst had been two summers earlier when the inside of his elbows had gone raw. I was so confused as I thought his diet was under control and he had been relatively symptom-free.

Long story shortened — he hadn’t been taking his enzymes at school. His teacher thought a second grader should be able to be responsible enough to remember on his own!? I’d lost track of the last date I brought refills. Ultimately, after two months of attempting to remedy his rash and adjust his diet, he still wasn’t getting relief. I asked his doctor to do a food allergy panel, which came back positive for several allergens which were a part of his normal diet (including milk and eggs).

In the middle of that, my grandfather was hospitalized after a heart attack and my sisters and aunts and I all gathered at his house in Fresno. There was cleaning and packing and grocery shopping required to get his house in order for his return. This is a much longer story, but amidst my absence from work and home, my husband and daughter were doing what they could to care for Parker. We were also in the middle of another move into a healthier home after realizing the apartment could also be the culprit for Parker’s eczema due to his allergies to dust mites, cats, dogs, trees, grasses, and cockroaches.

It would be nearly 18 months before Parker would fully heal. It was a strenuous journey and lots of trial and error. After taking him out of school to be homeschooled while I worked part-time from home and part-time at the office during the hours my daughter or his tutor were there, I let him sleep for the first few weeks. He slept 12 and 13 hours at a time while his body healed! I felt horrible that I hadn’t been on top of keeping him healthy while I figured out how to manage my own health issues while being a working mom of four kids still at home.

Then a Celiac Diagnosis for my Oldest

As if we hadn’t already battled enough between the moving, job adjustments, and other health issues, upon our move to the last rental in California before our move back to Idaho, our oldest son (sixteen at the time) – was diagnosed with Celiac. Due to ridiculous red tape with our California Medi-Cal and my health insurance plan cancelled after being laid-off, he wasn’t able to get follow-up testing or care until we’d established insurance in Idaho.

Thankfully, it took a whopping eleven days to get insurance and a doctor’s appointment in Boise! This was a relief after the dozens of phone calls which took upwards of three hours at a time I’d spent between the three agencies in charge of health insurance programs in California prior to our move. Even thinking of it now makes me mad, so I will quickly change the subject!

Anyway, this is going far longer than I thought, and details don’t matter as much as my point that we have battled a lot of health issues in the past decade!

Though I still have bouts of mild depression and insomnia, I feel I have most of my mental health issues under control. When I don’t (such as during my 10 days of PMDD each month — I know it’s temporary and try to focus on other things like working in my garden or listening to encouraging podcasts if I don’t have energy for physical things).

My oldest son (see I Never Thought I Would Call My Son Beautiful) also takes on a lot of my attributes in this area, but on more extreme levels. I don’t know if it’s because he’s the middle child and the more quiet of the bunch, or if he just got more of my DNA in these areas. He also struggles with two autoimmune disorders, insomnia, depression, and social anxiety. Thankfully, he’s recently started dating a sweet young lade and I think the companionship has really helped boost his spirits. He says he’s the happiest he’s ever been. After all, it’s not good for man to be alone, right?

Looking Forward to Health in 2020 and Beyond

I apologize for such a long post! I want to end on a positive note by first saying thank you for sticking with me through this look back at our health struggles!

This morning I was flashing on some of the women I follow on Instagram and how they struggle with the normal and not-so-normal challenges of mothering little ones and teens or both at the same time! My heart went out to them and even though I’ve obviously not arrived, I know there is hope.

Even if that hope is in pockets of good days that reside in between the hard days — I know God has a plan! I know He is with me no matter the type of day I’m having and that he DOES NOT CHANGE!

Some things I’ve learned that help me to partner with God in my health journey include:

After all, I’m just a woman who was once a just girl with a dream to write her story one day.

These verses highlighted in the Rhythms of Renewal bible study I’m slowly working through (and far behind on according to the online study schedule) are a part of that promise as well: