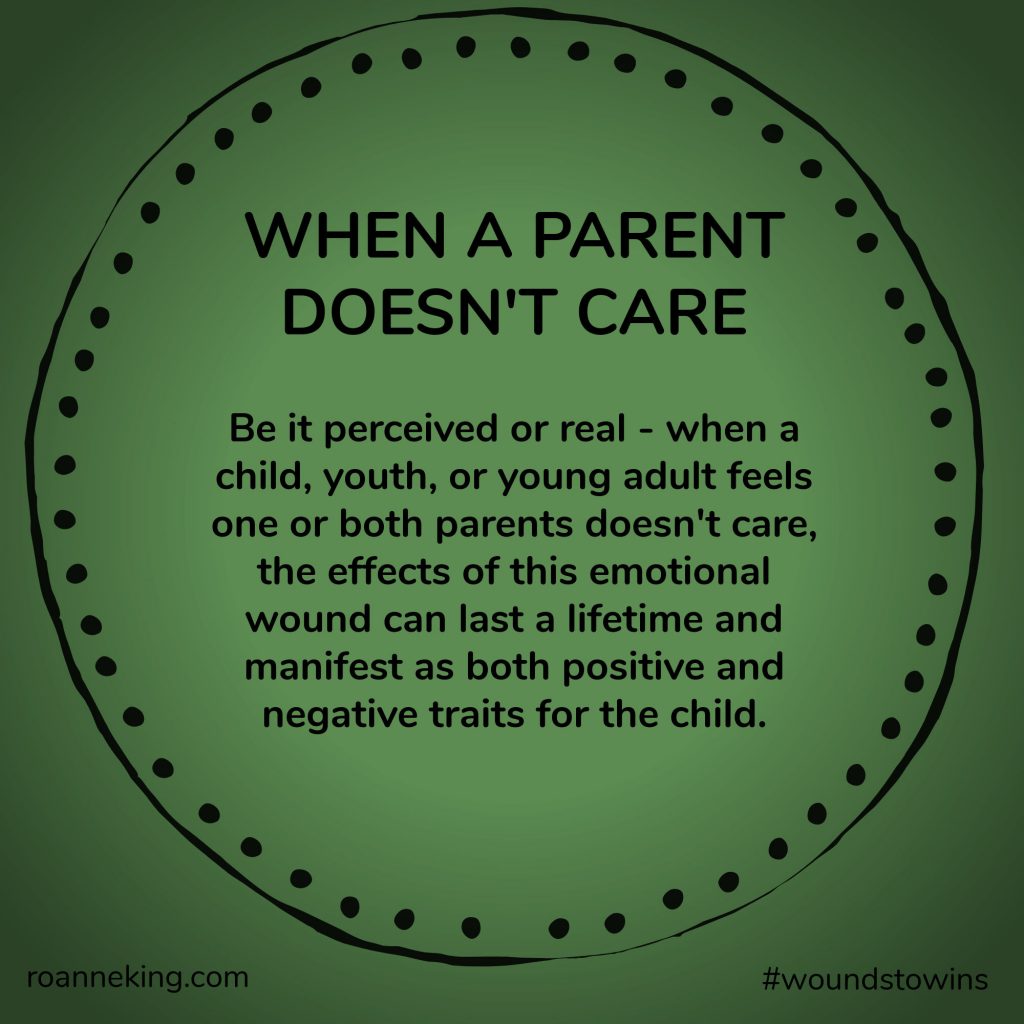 This is in no way a reflection of my own upbringing! But I realize that may not be the case for everyone.

Knowing there’s a good chance my mom or dad may read this, looking back on my childhood with adult eyes, there were moments I thought my mom or dad didn’t care — but I now realize that they did care!

I’ve barely scratched the surface here as I begin exploring the responses each of my characters will have to being raised by an uncaring, insensitive mother.

Because I desire my real life experiences to be only a springboard to my fiction, I’m exploring the facet of a truly uncaring parent. However, I also believe that even those parents probably don’t care because of wounds from their childhood.

Regardless of reality or reasons for actions or words that send a message that someone doesn’t care, the emotional wounds that result can manifest in many ways.

My two sisters and I experienced many of the same moments with our parents while we were children and young teens. Yet, our perception and response to the more negative (and seemingly uncaring moments), shaped us in different ways.

As children, the women in my novel A Cord of Three (in progress), experienced several childhood wounds as described in the Emotional Wound Thesaurus by Angela Ackerman and Becca Puglisi. I’m clumping them together under the description of “When a Parent Doesn’t Care”. This resource has really helped me to better define the wounds and resulting character traits and fears for each sister. I highly recommend it for anyone writing about a character whose past defines their present (which is pretty much everyone!)

First, all three girls experienced the abandonment of their father. Though the youngest, Ava, has no memory of him at all, Sadie and Rachel have a few memories in which they cling to. The resulting wounds they carry into adulthood are very different due to their ages, birth order, and perceptions of the meaning behind why their father left. To an extent, they all blame their mother (but aren’t fully aware of this fact until later in the story.)

Next, they experience the irresponsible behavior of their mother, which can be in part construed as being raised by neglectful parents.

The girls are often left to their own devices as their mom takes on part-time work, goes out at night, spends times away while pursuing love interests or sugar-daddy prospects. While Sadie takes the role of “mom” to ensure her sisters’ needs are met, Ava takes advantage of unsupervised time to have fun. Rachel is sort-of caught in between, not wanting to misbehave, but choosing to focus on taking responsibility for herself the best way she can.

Does Kate (their mother) Actually Care?

Not at the time. I wish I could go into her wounds and where they stem from, but that would give away the prequel to this series! The only obvious possible “why” may have to do with why the girls’ father isn’t in the picture, but I can’t say more at this point.

Sadie becomes resentful of her mother and Rachel’s apparent lack of concern for Ava’s behavior. Deep down, Sadie cares more about appearances — the appearance of success and a nice home. This is her primary motivation in making sure her sisters get decent grades, stay out of trouble, and do their portion of the housework.

Rachel volunteers at church and strives for straight-As to make up for her mother and sisters’ moral compromises. She sees both of her sisters and their mother acting in self-interest and it breaks her heart. She knows what they strive for is temporary and will eventually lead to emptiness and heartache.

Though this is still a work-in-progress as I refine the middle portion of my manuscript, I’m deciding how this wound will translate to each sister in their adult lives. At this point, Ava does whatever it takes to survive and NOT depend on a man to provide for her and her daughter. Rachel has devoted her life to her children, strives to honor her husband, and refuses to act in any way that could be perceived as selfish. Sadie has devoted her life up to the beginning of the novel to creating stability — a nice house, nice things, a substantial savings and a solid husband — before ever considering bringing a child into this world.

The question at this point is have their attempts to overcome their wounds been a success? Or are they all just applying a bandage to the inevitable trigger that will force each of them to see their strategies have failed? What will the trigger for each of them be as they interact during their grandmother’s birthday party?

I have a few ideas about the answers, but revealing them now will spoil the final story!

By sharing how the fictional wounds represent our real ones, both are subjective of my personal experience as well as the goal of the story. Overall, the story is “based” on actual events, but it is not an accurate representation of the events of our childhood, even when I include certain actual details of certain memories to convey unique detail related to setting and routine, but not necessarily emotions and thoughts.

For the “truth” record, our actual mother, though young and often ignorant of some of the troubling situations we found ourselves in, did not embrace loose living or expect others to care for us while she had fun. Even if some portions of events, emotions and reactions ring true to the ears of those who experienced these moments alongside of us, I’ve used literary license to exaggerate or understate to make my story work for fictions’ sake. This may be a given for those in the fiction writer’s realm, but not so much for readers or the family and friends who’ve inspired each character, so I want to be clear.

I also excluded a father in this story to focus more on the relationships between the sisters and their relationship with their mother. Though the lack of a father figure factors into the equation, I am not modeling their fictional father after my own to any extent.

Overall, this blog post series explores the real-life experiences of my sisters and how I’ve used them to create the fictional characters, their emotional wounds, and how each woman learns to overcome their wounds with a win in the end.