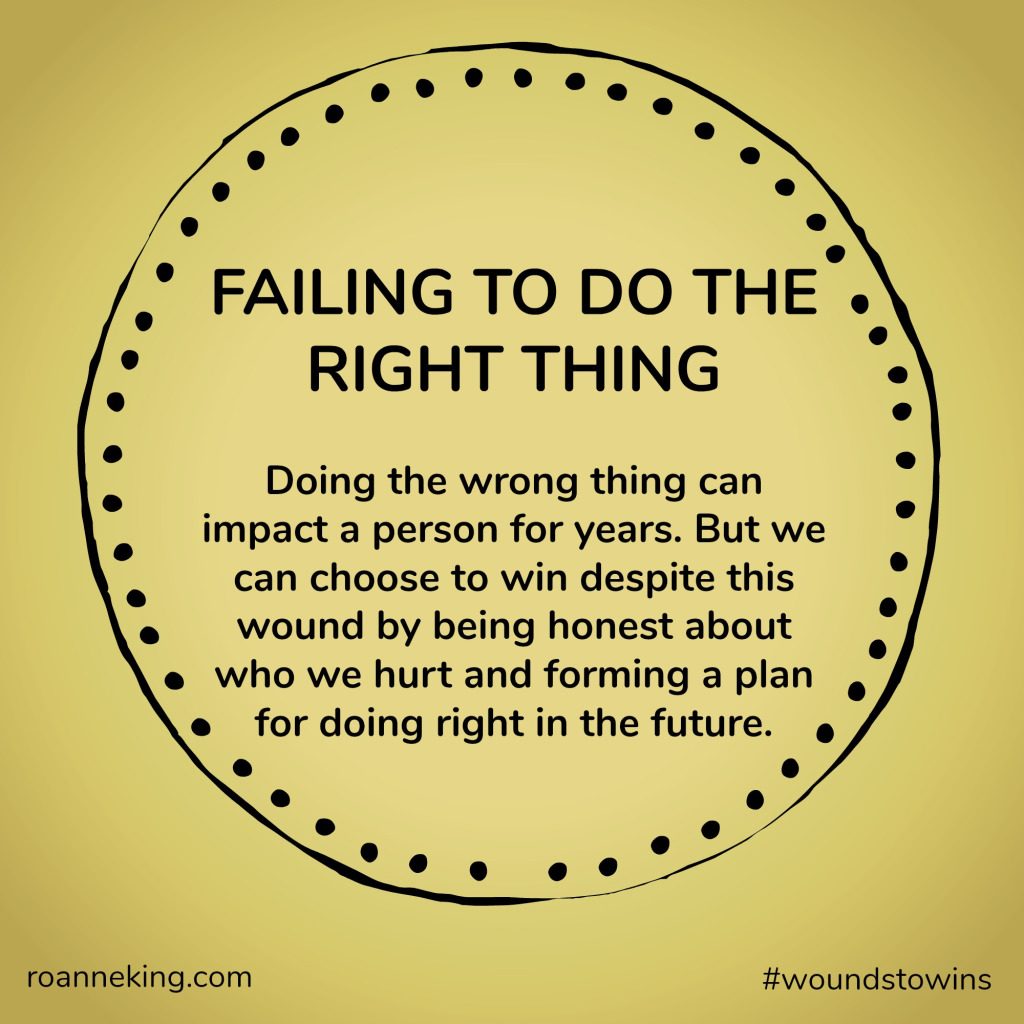 This wound is one of the more difficult ones for me to demonstrate through my characters in A Cord of Three (working title for my current WIP). To start, I need to determine what the “right thing” means. In this world where what is right is subjective at best, and being redefined daily at worst, how can I do this in a realistic fashion?

Even more challenging is my choice to use this wound as the primary, shared wound among the sisters Sadie, Rachel, and Ava. This wound is the driving force of who they have all become, and the reason behind their adversity. Of course, they don’t know this yet, and will still be exploring the depths of this wound and how to heal from it long after this first novel ends.

Have you ever failed to do the right thing?

If you’ve survived your teen years, the answer is probably yes. “Survive” is a key component here. Giving in to peer pressure to avoid chastisement from peers can extend far beyond formative years. Even as adults, we can be put in difficult situations where we lean toward comfort instead of conviction. For many women, this can be especially challenging when that choice involves a sister or a lifelong friend.

Sometimes the choice seems harmless, and the consequences short-lived. Other times the choice isn’t so clear. We think we are doing the right thing at the moment, only to later learn it was the wrong thing.

Then there are times when we know we have to do the right thing, even if it clashes with what everyone else thinks is okay, or not a big deal.

It’s these times when doing the right thing is rarely easy.

And if we fail, then the repercussions can last a lifetime, and affect many other people in the process.

This is the case for the three sisters in my fictional work-in-progress. Each justified and rationalized their choices one night — and afterward, each blames herself for what happened, and each carries her self-blame in secret. Their methods for covering up the pain of their failure are as different as the seasons. But the cover-up serves as an inadequate band-aid, hardly covering the gash that still festers, no matter how deep it’s buried beneath the surface.

When you fail to do the right thing, you might …

The oldest sister, Sadie, blames herself for not protecting enough. As a result, she lives an overly cautious adult life and strives for complete perfection and control (at least from the outside.) She will not take risks, and will only make a choice when she can reasonably predict the outcome. She’s also avoided motherhood up until now, and she’s about to answer to her biggest fear — can she protect her own child despite having failed to protect her sister?

The middle sister, Rachel, chose to seek redemption, but is also caught in a world of rules and thinking doing the right thing according to God will somehow erase the part she played that night. Because she’d kept quiet despite not really wanting to go, she resolved to speak up no matter the cost. But her voice of reason and conviction fell deaf on her sisters’ ears, and eventually prevented her from influencing them at all.

The youngest sister, Ava, the true victim of that night, took things into her own hands a different way. If Sadie went south and Rachel went north, then Ava went east just to spite them and appear to be in control. She justifies and rationalizes every sort of wrong in the book, from promiscuity to lying, cheating and stealing — her only way to “survive” in her eyes, was to gain control through whatever means necessary. She uses her beauty as a tool to manipulate until she tires of a life of lies and is ready for a change. It’s then she finds herself pregnant in high school and feels she has no choice but to use her manipulative skills to survive as a single mom and give her daughter every opportunity she never had.

No matter how we justify a failure or our response to it, especially when it comes to doing the right thing, lies are often at the root of it all.

It’s normal for teenagers to do that

It’s not that bad

How will Sadie, Rachel, and Ava recover from such an old wound that has affected them all more than they realize? When circumstances bring them together and demand honesty, the miracle of healing begins. When they realize each of them has shouldered the pain all these years, their own wounds surface, despite vulnerability, and the restoration process starts.

There is forgiveness within and without. But it will take longer than a late night sister bonding time in the grandparents’ backyard fire-pit to rebuild and renew over two decades of habits and hangups.

Reality vs Fiction Regarding Resolution

As an author, I’m required to bring about some sort of resolution by the end of a novel. Even in a series, closure is needed to temporarily satisfy the reader until the next book comes out!

In reality, we are all capable of growing and learning continually if we choose to do so. Digging up the past isn’t always pleasant, but often acknowledging how our choices made us into who we are can be the first step toward healing from emotional wounds in a healthy and productive way.

By sharing how the fictional wounds represent our real ones, I realize there is a lot to be interpreted regarding which parts are real and which are make-believe. Overall, the story is “based” on actual events, but it is not an accurate representation of the events of our childhood, even if I’ve mirrored certain memories to include depth and layering.

Also note, that I have decided to exclude a father all together in order to focus more on the relationships between the sisters and their relationship with their mother. Though the lack of a father figure factors into the equation, I am not modeling their fictional father after my own to any extent.

However, this blog post is meant to explore the real-life experiences my sisters and I had and how I’ve used them to create the fictional characters, their emotional wounds, and how each woman came to overcome the wound with a win of some kind.